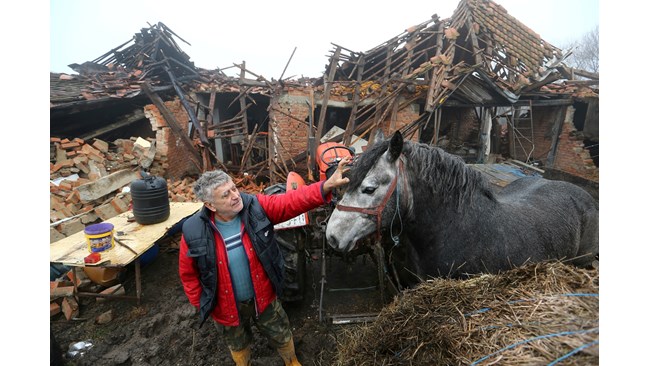 Weeping villagers in one of the worst-hit villages, Maiske Polyane, say they have received blankets, food and other assistance, but do not know what to do next. They

because of their pets

The rain turned the dust from the remains into mud.

“We can’t say good morning, it’s not good,” said the mayor of the collapsed town of Petrinja, Darinko Dumbovic. “This morning we had a third and fourth quake, short but strong. What had not fallen before is now falling from the ruins of Petrinja. Fear is ingrained in people, “he added.

A series of aftershocks continued to shake the cracked buildings in Petrinja, Sisak and surrounding villages. The strongest two were registered early Wednesday morning – one with a magnitude of 4.8 and the other with 4.7. Their depth is 8 and 10 km, respectively.

As after the apocalypse – this is what the Petrinja area looks like on Wednesday morning, local media report. The streets were filled with hundreds of people lighting fires in the cold. Others pitched tents, lay in their cars or on camp beds in military barracks. The death toll plummeted as rescue services began clearing small villages around the epicenter. Among the 7 dead was a 12-year-old girl. After a 7-hour search, the body of a man who worked as an organist in a church was found under the rubble. A father and son, buried in their house, also died. Another six people were seriously injured and 20 were slightly injured. The search for those buried under the rubble continues.

To help, authorities lifted a ban on movement between regions imposed until January 8th due to the pandemic. Except the services themselves

and other citizens who caused traffic jams to arrive in Petrinja. Efforts are being made to shelter the victims.

“People have accommodated people in the gym in Sisak, but it is not big. Tents are being pitched. There are people who survived the open fire in front of their houses. The majority of the population will not be able to return, “Violeta Simeonova, head of the European Parliament’s office in Croatia, told BNT.

A Bulgarian living in Sisak refused to evacuate, our ambassador to Zagreb Genka Georgieva told Nova TV. His home was not damaged by the quake. There were more than 40 earthquakes in Croatia within 50 hours.

With 100,000 euros, Bulgaria will help restore two iconic buildings after the quake in Croatia, related to Bulgarian history, Foreign Minister Ekaterina Zaharieva announced. “The first is the Gornograd High School. We will allocate 50,000 euros there. The second is from the Croatian Academy of Sciences and Arts, which requires a total of 5m euros, “she said.

Bulgarian students, scholarship holders of the Bulgarian Exarchate, such as Krastyu Sarafov, Lyubomir Miletich and Dimitar Shishmanov studied at the Gornograd High School.

The Croatian Academy of Sciences and Arts is the successor of the South Slavic Academy, founded by Bishop Josip Strossmayer, who in the 1970s retained five seats for representatives of Bulgaria. Among the first Bulgarian members are Marin Drinov and Stefan Bobchev.