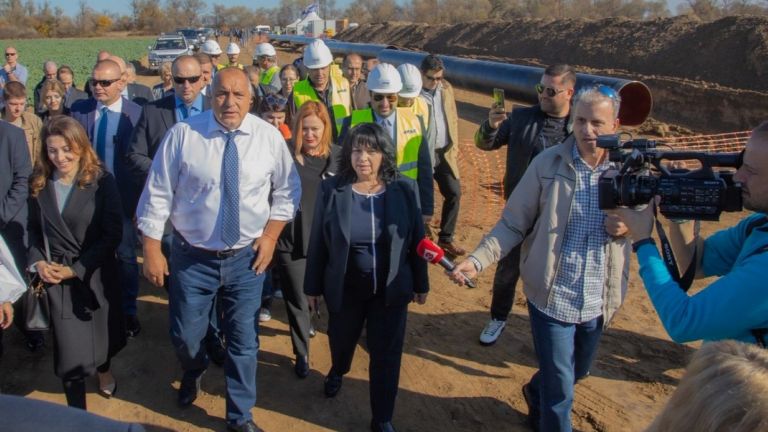 The forthcoming December 31 will remain key in the gas history of Bulgaria, and for the first time in our recent history our country will start supplying natural gas from a new source – Azerbaijan. The deliveries are planned to be made via the new gas connection between Bulgaria and Greece, which will be completed in the next few months. And while the process is being finalized, the temporary transmission of natural gas will take place through the existing reverse gas pipeline between the Tower and Sidirokastro.

The delivery date seems to have been symbolically chosen to end a difficult year, including for the gas sector. Thus, we will welcome the new year 2021 with hopes for full diversification of supplies and security in the event of a crisis caused by geopolitical interests and disputes in 2009.

to solve the gas conundrum in which our country is placed. In reality, this pipe is the first source of fuel for Bulgaria, which does not come from Russia. That is why the government has high hopes for this project, which will have many benefits for business and consumers. The deliveries from Azerbaijan will be made through the TANAP gas pipeline to Turkey and then through TAP with a diversion for Bulgaria to the Greek city of Komotini.

The gas connection between Bulgaria and Greece has a total length of 182 km, of which 150 km are on Bulgarian territory. It starts from Komotini, Greece, and connects to the Bulgarian gas transmission system of Stara Zagora. Its technical capacity is from 3 to 5 billion cubic meters per year. The total value of the IGB project is 220m euros.

Apart from Azerbaijan, our country will be able to import natural gas from other sources – American, Israeli, Egyptian, Qatari gas through LNG terminals in Greece, and in the new Alexandroupolis terminal our country will participate in the construction and operation as a shareholder.

It is clear that the more natural gas sources Bulgaria has, the more our country will become an unavoidable factor in the supply and transit of natural gas to Europe. That is why a few years ago the government proposed the concept of building a gas hub “Balkan”, through which to transport fuel from our country in different directions, in which the flows of the IGB will flow. Thus, our country is involved in the great rearrangement of global gas flows from South to North.

Other countries also rely on the gas interconnector with Greece

from a region like Romania and Austria and even all of Southeast Europe. Natural gas from Azerbaijan through Bulgaria can reach the Ukrainian gas network, at the request of traders and competitive prices. According to the plan, the capacity of the gas pipeline is for the transmission of natural gas up to 5 billion cubic meters per year. When the capacity is filled, a significant part of these quantities will go to the regional market, due to the low consumption of blue fuel in our country. There has already been talk of the possibility of increasing the capacity of the pipeline if the demand for natural gas in the region increases.

“For us, diversification is especially important because it will allow us to receive gas from new sources for Bulgaria, such as Azerbaijan and the United States. The possibility of connecting the interconnector with other large-scale energy projects such as the Trans-Adriatic Pipeline and TANAP will position our country in a whole new way. on the gas map of the region, which is one of the main motivations for the project to work so hard “, explained a few months ago in an interview with 3eNews Teodora Georgieva, CEO of ICGB, which is responsible for the construction of the gas connection. She explained that according to the plan, the commercial operation of the gas pipeline should start no later than the middle of 2021. This plan is still being followed, despite the delay that occurred due to the pandemic of COVID-19 around the world. “The ambition of the team and the contractors is to complete the project on time, looking for ways to optimize the work to compensate for the delay caused by the restrictions on measures against the spread of COVID-19,” Georgieva explained at the time.

At an online conference in early December, Minister Temenujka Petkova also stressed the importance of the interconnector and pointed out that it is among the seven highest priority EU projects and is key for the entire region. “IGB will connect us with the Southern Gas Corridor and will ensure real diversification of natural gas sources and supplies. Diversification is a top priority for Bulgaria, as it means competitive prices and a competitive economy,” said Minister Petkova.

It also became clear at the event that the deliveries of the IGB pipes will be completed in December, and the clearing of the entire gas route is almost complete. “As of December 8, there are 114 km of pipes in preparation for the next steps. The processes of welding the pipes, preparation of cold bent elbows and heat-shrinkable bellows are also progressing. At the moment over 80 km are welded and nearly 50 km of the welded sections are laid. in the excavated trench. The backfilling of the trench in the finished sections continues, followed by the installation of optical cables and reclamation “, said the executive director Teodora Georgieva.

Prime Minister Boyko Borissov made several inspections of the pipeline’s construction only this year. “What we had to do, we did, so that there is not a day’s delay in this extremely important geostrategic project – from Alexandroupolis to our part, we have 20% there so that from South to North can flow different from the current gas – 100% diversification “, the Prime Minister pointed out during his last visit. He meant that in addition to the construction of the gas pipeline, our country bought 20 percent of the company’s shares for the future LNG terminal near Alexandroupolis.

A serious challenge for the project will be the passage of the gas pipeline under the dam “Studen Kladenets” near Kardzhali and under the river Maritsa in the region of Dimitrovgrad and Haskovo. Some experts are even starting to discuss options for the American power plants in the Galabovo area to be supplied with natural gas through the IGB, but so far no one has financially calculated how much such an investment would cost the two power plants. However, this move would allow energy companies to continue to operate for a long time, complying with EU requirements for low-emission energy and the Green Deal. Along with the IGB project, our country managed to persuade Azerbaijan to invest in the construction of a gas distribution network in our country. The project is still in its infancy, such investments in the regions of Kardzhali, Haskovo and Stara Zagora can only bring benefits to business and comfort to households.

Liquefied gas from all over the world can enter our country

In Bulgaria, the import of liquefied gas has been talked about for many years, but everything is only on paper. Through the IGB project, however, things are really moving towards the supply of LNG gas in our territory. The reason is the liquefied gas reception terminal under construction near the Greek city of Alexandroupolis. By building the facility there, the entire region will have opportunities to import liquefied natural gas from countries such as the United States and Qatar. The plans are for the facility to be ready in early 2023.

Politicians have given a lot to the IGB project in recent years, which ultimately helped complete it. It is in a few months that Bulgaria and the region will already feel the movement of the gas markets, which will ensure the much-sought energy security and stability of supply. And if quantities of liquefied gas flow through the Bulgarian gas system, then Gazprom’s monopoly in the supply of natural gas will be discussed only in the past.