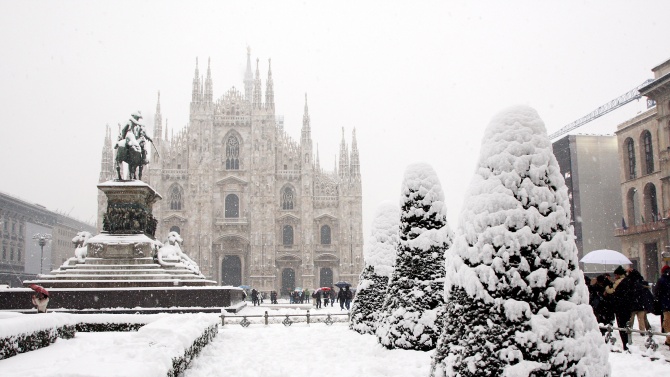 Emergency services in the Lombardy, Piedmont and Liguria regions have responded to more than 150 alerts, the fire safety service said on Twitter today.
Police and civil defense called for caution and advised people not to drive if possible.
A woman was injured when a pole fell in Milan, ANSA agency reported.

A storm warning was issued on the island of Sardinia, where authorities said a 54-year-old firefighter had died in an accident while securing a power line.
Interior Minister Luciana Lamorgese expressed condolences to the man’s family.

In Venice, authorities have activated a flood protection system due to rising sea levels. Today’s forecasts are for an increase of 130 cm above the norm.
Traffic is normal on the Brenner highway, which connects Italy with Austria, but meteorologists warn of heavy snowfall, DPA notes.

Snow is falling in Milan and has disrupted car traffic in the capital of the northern Italian region of Lombardy, AFP reported.
A 76-year-old homeless man found on the street under the snow has died in hospital.

To the south, a strong storm passed through the capital Rome, DPA reported. Police temporarily cordoned off some streets in the city due to fallen trees.