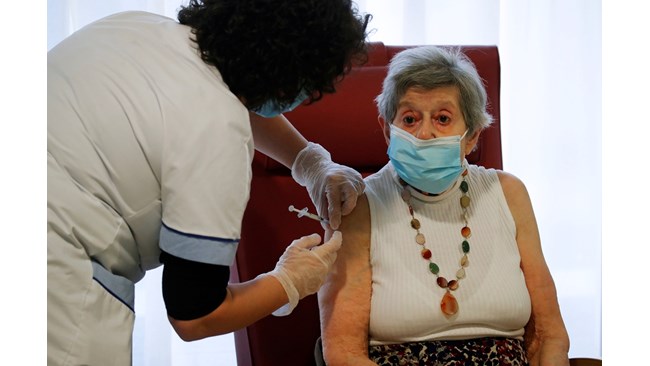 A 91-year-old French woman receives a vaccine against COVID-19. Most French, however, are skeptical. PHOTO: Reuters

Only 40% of French people want to be vaccinated against COVID-19, according to a poll conducted among 13,500 people from 15 countries. It assigns France the position of “world champion” in refusing immunization. The survey was conducted by Ipsos Global Advisor in partnership with the World Economic Forum.

Curiously, the rates are falling as the immunization campaign approaches. In a survey in October, 54% of French people were willing to inject, and in August, 59% expressed such a desire. When asked about the reason, 82% said they did not consider vaccines safe, and 16% were against them in general. According to French media, only a hundred people have been vaccinated in the country in the three days since the campaign began. Against this backdrop of growing skepticism, health experts predict an uncontrolled spread of the coronavirus in France after the holidays.

According to the same poll, only 43 percent of Russians are ready to get vaccinated and 53 percent of South Africans. Followed by Japan (60%), Italy and Spain (62%) and Germany (65%). At the other pole are China (80%), Brazil (78%) and the United Kingdom (77%), where the mass vaccination campaign began on December 8. In the United States, 69% want to protect themselves.

In Israel, 152,000 people were vaccinated on Tuesday alone. The country hopes to pass in 2021 with a total of 1 million immunized.

The head of the European Commission, Ursula von der Leyen, announced that another 100 million had been ordered for the EU, in addition to the already agreed 200 million, for which it became clear that they would arrive in batches by September. In early January, the European Medicines Agency is expected to approve the second US vaccine, Moderna, which is already being used in the United States.

The Chinese company Sinopharm announced that one of its vaccines against COVID-19 is effective in 79% of cases, AFP reported. For the first time, a Chinese company provides such statistics. Cuba, for its part, has revealed that it will vaccinate its population with its own vaccine, which should be ready within 6 months.

Iran, which recently complained that the United States refused to sell its developments, has begun clinical trials on its own vaccine.