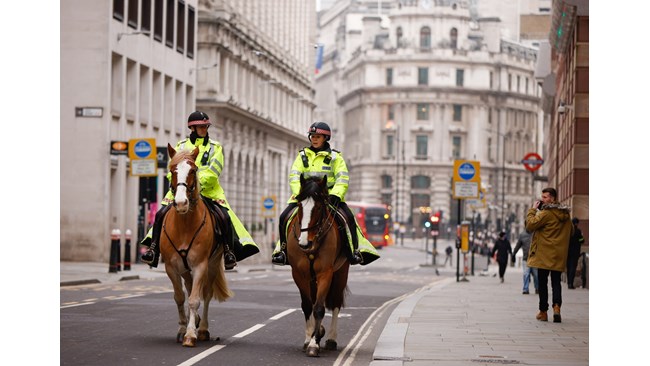 
Horse police are patrolling London, where a state of emergency has been declared over the coronavirus. PHOTO: Reuters

Third vaccine approved in the country, students threaten to strike because of the blockade

Newcomers to the UK will have to submit a negative test for coronavirus next week. Transport Minister Grant Shaps said this was due to the new South African strain of COVID, which was detected in two people in the UK and said it was of great concern to scientists because it was thought to be much more contagious and not it is clear whether vaccines can affect it.

London has not yet announced the date from which it will require a test and what exactly it should be. Government sources say that more accurate PCR tests will be needed, which will be done 72 hours before leaving the country where the traveler is located. Schaps warned that airlines would be instructed not to board people without a negative test, but if such a passenger reached the UK and refused to be tested on the spot, he would be fined £ 500.

The negative test does not cancel the current mandatory 10-day quarantine for arrivals. It is expected that the possibility of reducing it through a test made a week after the trip will be eliminated. Also ban the entry of people who have traveled to a number of African countries in the last 10 days, as well as the Seychelles and Mauritius – preferred winter holiday destinations. Tour operators have warned that the new measures will affect about 100,000 people in countries without testing systems, and British authorities must consider how to safely let them return to the island.

London Mayor Sadiq Khan has warned that the spread of coronavirus in the capital is out of control and called it a major disaster that requires special government intervention. London hospitals already have more than 7,000 infected, up 35% from the previous peak of the pandemic in April. An ambulance has been waiting for hours and more than 100 firefighters have had to help. Khan demanded that churches be closed and masks be worn outdoors.

Meanwhile, British regulators have authorized the use of a third coronavirus vaccine in the country in a bid to control the situation. This is the product of Moderna, from which the UK expects to receive 17 million doses in the coming months.

Authorities hope to remove some of the national restrictions in March, but scientists are skeptical of more than 60,000 infected daily and about 1,000 dead. Students have started an online subscription demanding that their dormitory fees be reduced after they do not appear to be able to return to campuses for months. They threaten to strike and suspend payments to universities.