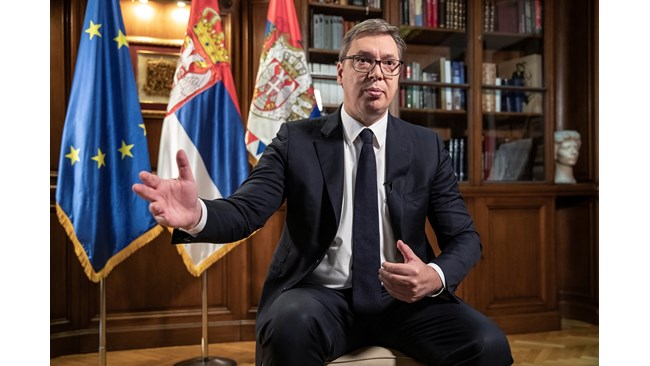 Authorities in Belgrade suspect the mafia or British intelligence

A scandalous revelation rocked Serbia. Part of the police has been eavesdropping for a year and a half on President Aleksandar Vucic, members of his family and some members of the ruling Serbian Progressive Party (SPP), the Kurir newspaper reported.

Conversations between the president’s brother Andrej Vucic and his older son Danilo, the director of the BIA intelligence service Bratislav Gasic, the mayor of Novi Sad and deputy chairman of the SPP Milos Vucevic, foreign minister Nikola Selakovic, MP Vladimir Djukanovic and the leader were wiretapped. of FC Red Star Zvezdan Terzic.

Kurir sources point out that not only were the president’s telephone conversations tapped, but at one point

in which he resides frequently. According to a newspaper source, part of the police is behind these actions. “Special equipment was delivered, unofficially, no one knew about it. The center from which the conversations were tapped is in the building of the Ministry of Interior “, the source claims. When some of the police found out who they were eavesdropping on, they took the recorded conversations to the president.

Vucic himself said he knew he had been wiretapped and that “the competent authorities will determine whether they are connected to foreigners”, stressing that the president’s wiretapping was

“There is only one goal, it is Alexander Vucic and everyone who dares to support him publicly,” the Serbian president told Pink TV, noting that a campaign has been under way since 2014 to try to liken his family. with that of Slobodan Milosevic. “It was all based on absolute lies – they started with stories that my brother owned the Franch restaurant, that he owned acres of land in Vojvodina, and then they started with the older son,” he recalls.

“My heart aches from what I did to Danilo and Militsa (his son and daughter – b.r.)“that I am involved in politics, that they have become the object of the services,” said Vucic, who claims that his son Danilo was monitored by police and reported to certain services.

“Then we reached” Jovanitsa ” (The largest marijuana plantation in Europe, whose owner and his associates associated with state institutions are defendants). Some sources immediately said, trying to divert attention from their responsibility – hey, he (the main suspect Predrag Koluvia – b.r.) is related to Andrew (Vucic’s brother)“, Said the president.

At the end of 2019, Serbian police raided the Jovanica organic food farm near Belgrade, detaining 9 people and nearly 4 tonnes of marijuana in one of the country’s largest such operations. Opposition groups said at the time that farm owner Predrag Koluvia had called Vucic’s brother when he was arrested.

The former head of the Criminal Police Directorate in Serbia, General Rodoljub Milovic, told Beta that if it is true that the Serbian president has been wiretapped for a year and a half, then the Serbian police do not exist. “While I was head of the Criminal Police Directorate, it was impossible to eavesdrop on anyone without a decision from the judiciary,” Milovic said. according to him

of the President are “confusing”

Lawyer Bojo Prelevic thinks the same and says the purpose of all previous stories about threats to Vucic is to attract attention. I think the main thing that is covered is Jovanitsa. “Jovanica” is something that has not happened anywhere in Europe. And that is why we have constant attacks against prosecutors, judges, we will also have attacks against inspectors. “I think that the citizens of Serbia should stand by their prosecutors, judges and not allow anyone to deceive them with nonsense about wiretapping the president,” the lawyer said.

In the eight and a half years of the Serbian Progressive Party’s rule, this is the 10th case in which the government has published information about the threatened security of the Serbian president, which has never been proven later, N1 TV emphasizes.

Bozidar Spasic, a former state security operative, also linked the latest wiretapping case to Jovanica. According to him, Vucic learned that his conversations were recorded just after the discovery of the marijuana farm.

“The aim is to disrupt the security system around the president, to create confusion,

to ruin his reputation

above all in the world

In our country there are parts of the security structures that are from the former regime and are against the current policy. It was clear when Vucic came to power that such elements would damage his reputation by launching attacks on his brother, his son and his family, “Spasic was quoted as saying by Serbian radio B92.

“Behind the wiretapping of the president

hide one or more powerful

who rely on certain structures of our services, but also on the opposition, certain tycoons and parts of the mafia. They are all motivated by Vucic to step down to pursue his interests. President Vucic’s state policy is transparent, he has no personal compromising secrets, but it is certain that the data obtained will be used for scandals, “added Luban Karan, a retired counterintelligence colonel.

Serbian media reported that a top-secret, large-scale and detailed investigation has already been launched to establish who, on whose orders and for what purpose, wiretapped the head of state. The act is being investigated as a serious crime and “an attempt to overthrow the constitutional order”.

Interior Minister Alexander Vulin, in turn, commented that the wiretapping of the president was related to the mafia war he had declared.

In June 2018, the then President of the Bosnian Serb Republic, Milorad Dodik, now the Serb representative in the Bosnian Presidency, said that the British intelligence services were eavesdropping on him and Vucic, adding that they were not ordinary soldiers, but representatives of the British intelligence services. who use the most modern equipment in the Balkans. According to Serbian media, there are 55 foreign security services in the country from 40 countries.

Serbian Parliament Speaker Ivica Dacic was quoted as saying by Danas that both in Bosnia and abroad, great efforts are being made to abolish the Republika Srpska, and this is being done “under the table, with pressure exclusively on the Serbian people”.

As the Eavesdropping affair fills newspaper columns, a Supreme Court ruling is pending, which must confirm or deny the allegations in the marijuana case at the Jovanitsa farm.