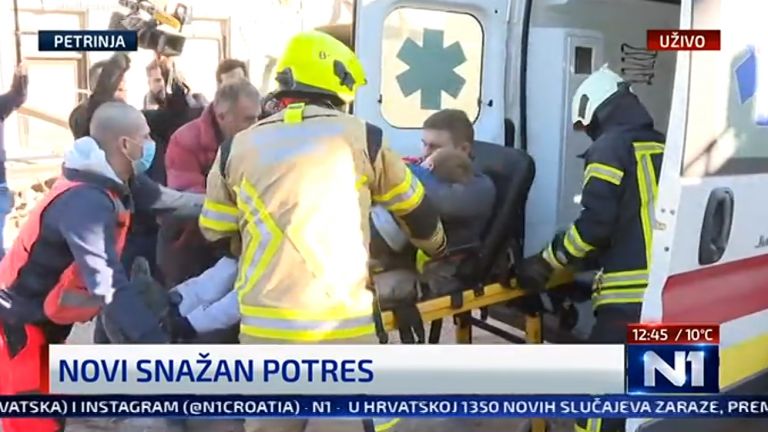 The quake’s epicenter was 46km southeast of Zagreb, in the Petrinja area. The earthquake is 10 km deep. It was registered at 13.20 Bulgarian time.

The quake lasted about half a minute and was felt in Rijeka, Vukovar, Split, Zagreb.

Most of Zagreb has been left without electricity, cars are in columns, trams are standing still, citizens are on the streets, there are injured, local media reported.

The Slovenian nuclear power plant in Krsko has been shut down under the usual procedure in case of major natural disasters.

The Croatian army is moving to Petrinja, where at least 300 soldiers are arriving to help. The situation there is dramatic, there is a lot of destruction, local media describe the city as “destroyed”. In his first statement after another strong earthquake, Petrinja Mayor Darinko Dumbovic said half of the city had been destroyed and demanded that emergency aid be sent to them.

According to unofficially confirmed information, one child died. A hospital and a kindergarten were also reported destroyed. A father and his child were pulled out from under the rubble.

“We take people out of the cars, we don’t know if there are any dead and injured, I heard that the kindergarten collapsed, but fortunately there are no victims there,” Dumbovic said.

A child died in today’s earthquake in central Croatia, according to the information site Index.

The death of a 12-year-old girl was confirmed by Petrine Mayor Darinko Dumbovic at the epicenter of the quake. The mother of the dead child is currently receiving medical treatment.

There are many collapsed buildings in the city, shouts are heard, there are wounded and dead, the site states.

“It’s scary, there are dead, there are wounded. We saw a child die in the square. Petrine’s center was destroyed. Seven of our engineers were buried under a building, but we managed to get them out. It’s a disaster, send the help you have,” said one of the engineers sent to assess the damage from yesterday’s magnitude 5 earthquake in the same region.

Rescuers are trying to rescue survivors from the rubble of demolished buildings in the town of Petrinja near the quake’s epicenter, television reports said. Tomislav Fabijanic, director of the ambulance service in the neighboring town of Sisak, said there were many injured in both towns. “There are fractures, there are concussions, some need to be operated on,” Fabianic said.

Police urged citizens to go outside and stay away from buildings that could collapse.

A young man from a village near Glina is the second victim of the earthquake in Croatia, the information site Index reported. “A 20-year-old man from Maiske Polyane died, he was buried under the ruins of his house,” Glina Mayor Branka Mitic confirmed to the 24sata website.

At least 20 people were injured in the neighboring town of Sisak, two of them seriously.

Today’s strong earthquake damaged the building of the Croatian government, from which all those present were evacuated, along with Prime Minister Andrej Plenković, Tanjug reported. The quake was strongly felt in the building, and plaster fell from the facade. The recently restored murals in Ban Jelacic Hall were also damaged. Vecerni List reported that their journalist had interviewed Prime Minister Plenković when the quake struck. Immediately after the quake, he went to Petrinja in the area of ​​the epicenter of the quake, where there is huge damage and possible casualties.

There are no data on Bulgarian citizens injured in the earthquake that shook Croatia at 13:20 Bulgarian time, said the press center of the Ministry of Foreign Affairs.

According to our embassy in Zagreb, the quake had a magnitude of 6.2 on the Richter scale with an epicenter in the area of ​​the city of Sisak. The authorities are assessing the material damage. The quake was also felt in Serbia and Bosnia and Herzegovina.

Deputy Prime Minister and Foreign Minister Ekaterina Zaharieva talks with Croatian counterpart Gordan Garlic-Radman about the devastating earthquake that rocked the Balkans this afternoon. “At this difficult time, Bulgaria is ready to stand by our Croatian friends. We are ready to help. I offer my sincerest condolences and wish a speedy recovery to the wounded,” Zaharieva said.

The Embassy of the Republic of Bulgaria in Zagreb is available to all Bulgarian citizens for assistance in case of need. The diplomatic mission, along with most of the buildings in the Croatian capital, currently has no power supply, but our staff are on line and performing their duties.

Yesterday, central Croatia was rocked by a magnitude 5 earthquake that caused property damage.